SINGAPORE — There is a significant risk of "vaccine breakthrough" with the Sinovac vaccine, or CoronaVac, with international evidence showing that many who had taken it were later infected with COVID-19, said the Ministry of Health's (MOH) director of medical services Kenneth Mak on Friday (18 June).

Addressing reporters at a virtual media briefing by the multi-ministry taskforce on the coronavirus, Associate Professor Kenneth Mak said that Singapore has been assessing the experience of countries such as Indonesia, which has vaccinated a "larger proportion" of the population using CoronaVac.

Alluding to recent reports that more than 350 doctors and medical workers in Indonesia were infected with COVID-19 despite being vaccinated with CoronaVac, Associate Professor Mak noted, "It's not a problem associated with Pfizer. This is actually a problem associated with the Sinovac vaccine, and in other countries, they are now starting to think about booster vaccinations, even six months out from an original vaccination for some of these vaccines as well.

"So it does give the impression that the efficacy of different vaccines will vary quite significantly," said Prof Mak, stressing that Singapore has "great confidence" in the Pfizer-BioNTech and Moderna vaccines, of which more than 4.7 million doses have so far been administered in the country.

Prof Mak was responding to a question on whether Singapore intends to introduce the Sinovac vaccine into its national vaccination programme. On Wednesday, 24 healthcare institutions were licensed by the Ministry of Health (MOH) to provide the Sinovac vaccine to those who wish to take it.

The 24 institutions were selected under the Private Hospitals and Medical Clinics Act (PHMCA) to be licensed providers under the Special Access Route (SAR). A number of the approved institutions have been seeing long queues of individuals forming at their premises, with some saying their telephones lines have been ringing non-stop in recent days, according to local media reports.

Sinovac remains unregistered and is not authorised by the Health Sciences Authority (HSA), and is to be provided only under the SAR framework. As such, it will not be covered under the Vaccine Injury Financial Assistance Programme (VIFAP) meant for the national vaccination programme.

Prof Mak noted that there still is some "outstanding data" on the vaccine that Sinovac has not provided to HSA, which is required to give "complete assurance" about its quality and safety profile. "We look forward, if data becomes available for us, then to (commence) this process of evaluation but unfortunately we're not able to do so."
HaHaHello 2021-06-19 13:03:18
2,635 new cases and 14 new deaths in Mongolia

Scientific advisers in Wales believe the UK is at the “pre-peak stage of a third wave”, first minister Mark Drakeford has warned.

Mr Drakeford told a press conference eight out of 10 new cases of coronavirus in Wales are believed to be from the Delta variant.

“In just a few weeks, the Delta variant has entered Wales and spread quickly throughout the country,” he said.

“There is a sustained and accelerating pattern of transmission, not just in the north and southeast of Wales but in all parts of the country.

“That means that we are, once again, facing a serious public health situation. Our scientific advisers believe the United Kingdom is now at the pre-peak stage of a third wave of this pandemic.

“Wales may be two to three weeks behind what is happening in England and in Scotland, where tens of thousands of cases have been confirmed, where there is widespread transmission and reports of increased hospital admissions as well.”

Mr Drakeford said both Nicola Sturgeon and Boris Johnson had paused plans to relax coronavirus restrictions due to the Delta variant.

"Today, I have to announce that we will be doing the same in Wales," he added.

The Welsh government will pause further easing of coronavirus restrictions for four weeks to allow for more people to be vaccinated, Mr Drakeford told reporters.

He said this would help Wales, which has the lowest Covid-19 rates in the UK, “manage the impact of this new wave of infections”.

“A four-week delay could help to reduce the peak number of daily hospital admissions by up to half,” Mr Drakeford said.

Delta variant infections in the UK have jumped by 78 per cent in just one week, according to the latest Public Health England (PHE) data.

Worsening rapidly in Moscow so the whole country is worsening.
Out of this 17,906 new cases, 9120 new cases are in Moscow!


I hope I have time to study the data of the Russia capitol, Moscow.

The lower left graph is the new cases time series provided by the Russian Government. Anyone would like to study the data of Moscow? 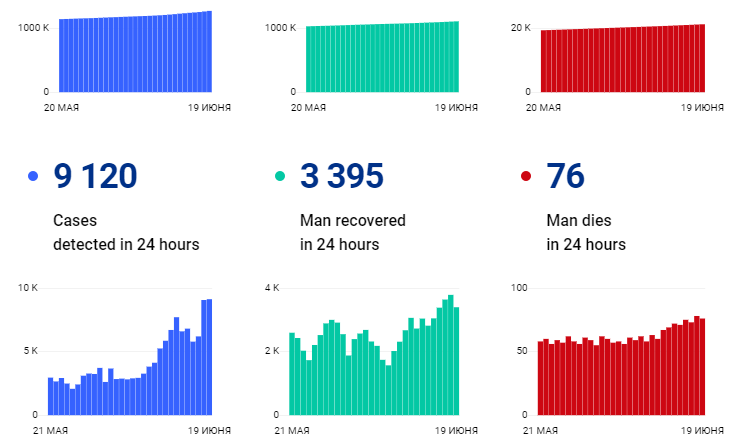 As of 19 June 2021, 12pm, the Ministry of Health (MOH) has preliminarily confirmed 14 new cases of locally transmitted COVID-19 infection. 10 are linked to previous cases, amongst whom 7 have already been placed on quarantine, and 3 were detected through surveillance. The remaining 4 cases are currently unlinked. Based on our investigations so far, the cases are in the community, and there are no new cases in the dormitories.

2. In addition, there are 7 imported cases, who have already been placed on Stay-Home Notice upon arrival in Singapore. All of them are returning Singaporeans or Singapore Permanent Residents.

3. In total, there are 21 new cases of COVID-19 infection in Singapore today.

4. We are still working through the details of the cases, and further updates will be shared via the MOH press release that will be issued tonight. 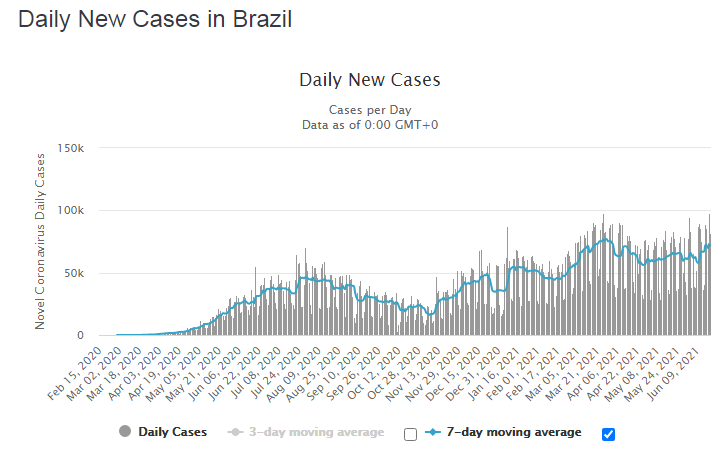 Reminder: What we have said more than 1 year ago:

Those countries that have Sunday/Monday effect also display this trend:
The daily new cases increases from the beginning of a week towards the end of a week. So we cannot say the situation is worsening just because the daily new cases have been increasing from Monday to Friday. Brazil demonstrates the strongest of this effect among all countries. The effect is so strong in Brzail that even the 7-day moving average still show this weekly oscillation as the above graph shown. For Brazil, the 3-day moving average is completely useless as the following graph shown: 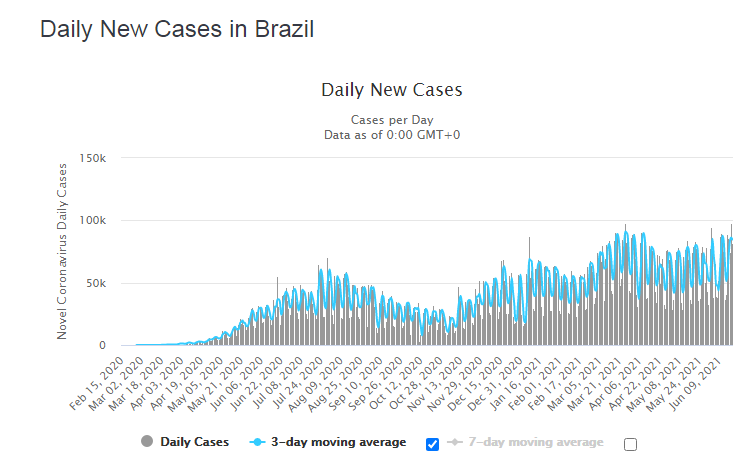 The 7-day moving average can solve both problems of Sunday/Monday effect and the increasing reported new cases toward the weekend.

Russia is notice exception in that both effects do not appear in Russian's data.
HaHaHello 2021-06-20 10:57:11
Taiwan is improving rapidly 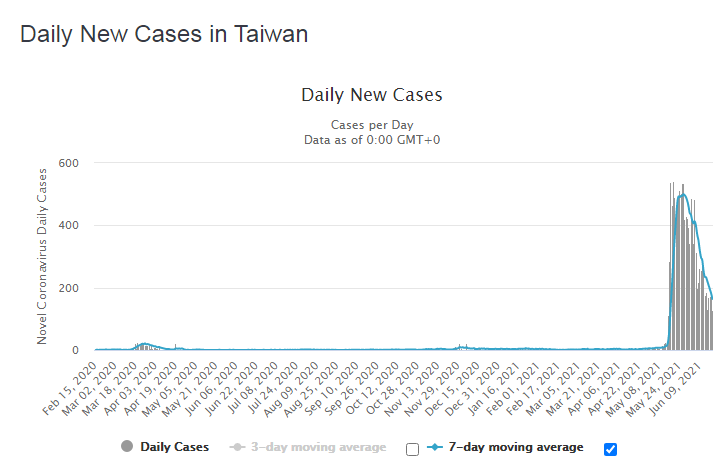 Notice that the data from Taiwan shows both the Sunday/Monday effect and the increasing reported new cases toward the end of a week.

I hope you all can remember what we said more than one year ago in the 【無了期唔知幾時完嘅武漢肺炎】國際疫情討論區 series.
This series of posts MAY be the best in the world!

台灣新冠肺炎本土疫情遲遲未降溫，許多人都把廣泛施打疫苗，當成解除三級警戒的關鍵利器。但近日國內長者開打AZ疫苗，已陸續傳出多起在打完疫苗後，老人家猝死的案例，引發人心惶惶。對此，中央流行疫情指揮中心今（20日）表示，昨（19）日接種後死亡案件新增18件，目前已有9例死亡案件送司法相驗解剖。
HaHaHello 2021-06-20 15:25:19
More than 350 Indonesian healthcare workers vaccinated with China's Sinovac vaccine got COVID-19 and dozens are hospitalized, raising questions about the vaccine's efficacy on variants

Thank you for creating 國際疫情討論區 series so that I can learn so much from other Hongkongers and ex-Hongkongers who have migrated to other countries years ago.

I believe that you have used BNO and have started a new life in U.K. that you don't have time to talk at 國際疫情討論區09. I will try my best to keep this post going.

Thanks again for creating this series of posts for us.