Since Zealand has done it the hard way by lockdown the whole country just because of one single local case, the effect of lockdown has just started to show. I conclude that the 7-day moving average responses too slow for this latest fast change and

New Zealand is improving because of the lockdown.

This set of data is from Worldometers. Due to a recent change in handling the data, the data from United States has been reported very late so that this is NOT the final data for Aug 30, 2021.

Furthermore, Worldometers has reported far too few deaths in Florida. I am considering to switch to other websites for reporting the data from USA.

Thailand has made siginifcant improvement so that its government has relaxed some restrictions.
HaHaHello 2021-08-31 19:12:19
161 new cases in Singapore

HaHaHello 2021-08-31 22:52:16
Day to day data subjects to fluctuations and other influence factors. The better method is to use 7-day moving average to determine whether it is worsening or improving. 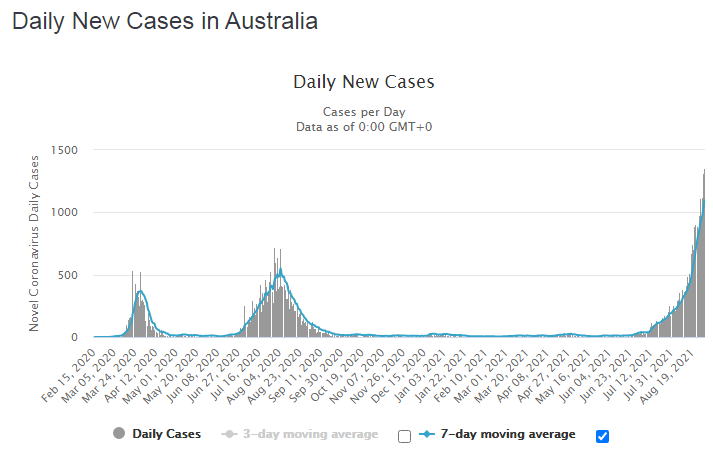 You have to draw the 7-day moving average (up to today) in order to understand why I said "Still worsening rapidly".

As the delta variant spreads through Florida, data published by the Centers for Disease Control and Prevention suggest this could be the most serious and deadly surge in COVID-19 infections since the beginning of the pandemic.

As cases ballooned in August, however, the Florida Department of Health changed the way it reported death data to the CDC, giving the appearance of a pandemic in decline, an analysis of Florida data by the Miami Herald and el Nuevo Herald found.

On Monday, Florida death data would have shown an average of 262 daily deaths reported to the CDC over the previous week had the health department used its former reporting system, the Herald analysis showed. Instead, the Monday update from Florida showed just 46 “new deaths” per day over the previous seven days.

The dramatic difference is due to a small change in the fine print. Until three weeks ago, data collected by DOH and published on the CDC website counted deaths by the date they were recorded — a common method for producing daily stats used by most states. On Aug. 10, Florida switched its methodology and, along with just a handful of other states, began to tally new deaths by the date the person died.

If you chart deaths by Florida’s new method, based on date of death, it will generally appear — even during a spike like the present — that deaths are on a recent downslope. That’s because it takes time for deaths to be evaluated and death certificates processed. When those deaths finally are tallied, they are assigned to the actual date of death — creating a spike where there once existed a downslope and moving the downslope forward in time.

Shivani Patel, a social epidemiologist and assistant professor at Emory University called the move “extremely problematic,” especially since it came without warning or explanation during a rise in cases.

Patel said Florida death data now show an “artificial decline” in recent deaths and without an explanation or context, and “it would look like we are doing better than we are.”

The change came the day after the state health department’s official Twitter account posted a series of late-night tweets accusing the CDC of publishing incorrect numbers, but offering little explanation.

“As a result of data discrepancies that have occurred, this week, FDOH worked quickly and efficiently with CDC to ensure accurate display of data on their website the same day,” DOH spokesperson Weesam Khoury told the Herald in a statement at the time. “To proactively ensure accurate data is consistently displayed, the Department will begin daily submission of a complete renewed set of case data to CDC, including retrospective COVID-19 cases.”

Long essay, read more at https://us.yahoo.com/news/florida-changed-covid-19-data-141255528.html
HaHaHello 2021-09-01 11:56:29
76 new cases in New Zealand
The 7-day moving average is going up further, but the 3-day moving average is going down further.
It seems that New Zealand has a very strong Sunday/Monday effect so that there were much fewer cases reported on 30 Aug and 31 Aug. Since New Zealand has contained the virus so well in the past that it offered too few data for us to study its Sunday/monday effect, we need more time to really know the trend in New Zealand.
HaHaHello 2021-09-01 16:41:12