Last year, we have so many people from many different countries to provide information on many countries. We had an unspoken mutual agreement that if one post information about one country, then the other people will study other countries so that we can cover as many as countries as we could.

Yesterday old news and a post at LIHKG has reported this.

A Ugandan team member, reportedly a coach, tested positive on Saturday at Tokyo’s Narita airport and was quarantined there. But the rest of the nine-person team was allowed to travel more than 500 kilometers (300 miles) on a chartered bus to their pre-Olympics camp in the western prefecture of Osaka.

Three days later, a second Ugandan also tested positive for the virus, forcing seven town officials and drivers who had close contact with the team to self-isolate. The team members were quarantined at a local hotel.

Concerns escalated after it was announced that both Ugandans had the delta variant of the virus, which is believed to spread more easily.

In response to criticism of the case, Suga rushed to Tokyo’s Haneda international airport to inspect virus testing for arrivals and vowed to ensure appropriate border controls as growing numbers of Olympic and Paralympic participants enter Japan ahead of the July 23 opening of the games.

Chief Cabinet Secretary Katsunobu Kato later Monday said Japan plans to step up quarantine requirements for Olympic athletes and other participants from areas where the delta strain has been detected by requiring daily virus tests for seven days prior to departure to Japan — extended from the current four days —and up to 14 days after entry and training in isolation in the first three days.

“Apparently the border controls are not adequate, even though there has been plenty of time to work on them,” he said.

Osaka Gov. Hirofumi Yoshimura said the entire team should have been quarantined at Narita airport.

Government officials initially defended the airport health controls as having properly detected and isolated the positive case, and said that contact tracing and isolation of those suspected of having had close contact was not their job but that of local health officials.

“No matter what measures you take, infected people would come in and it is unavoidable,” Japanese Olympic Committee President Yasuhiro Yamashita said at a news conference in Tokyo.

“Strict border control at airports is extremely important,” Yamashita said, urging the government to do more instead of pushing all the responsibility of contact tracing on local authorities.

Experts have noted a significant increase in the movement of people in Tokyo and other metropolitan areas since the easing of a state of emergency on June 21 and warned of signs of a resurgence of infections in the Tokyo region.

Tokyo on Monday reported 317 new cases, up from 236 from a week earlier, the ninth consecutive day of week-on-week increases, with an increase in cases of the delta variant. That could accelerate the resurgence to levels that might require another state of emergency during the Olympics, experts said.
HaHaHello 2021-06-29 09:21:29
A few days ago, someone has asked which vaccine Uganda is using.
The Ugandan Olympic team has used the British AstraZeneca vaccine.
HaHaHello 2021-06-29 09:23:00
Several people have posted news about Japan. Because of the Olympic, Japan will become the focus of the world, so please post more late latest COVID-19 news of Japan.
HaHaHello 2021-06-29 12:18:50

Perth, the capital of Western Australia state, began a four-day lockdown at midnight Tuesday, while Brisbane, the capital of Queensland, will enter a three-day lockdown starting Tuesday evening.
They join New South Wales' capital, Sydney, and Darwin, capital of the Northern Territory, which are already under lockdown.
Collectively, the four cities have a population of more than 10.2 million people, according to government data. As of Monday afternoon, the country has 271 active cases, the majority of which are from New South Wales, according to the national health department
Australia was celebrated for its initial response to the pandemic and for getting its economy more or less back on track long ago.
But with that security has come complacency, particularly in the federal government, which failed to secure enough vaccine doses to prevent the regular "circuit breaker" lockdowns that come every time a handful of cases emerge, or even the longer restrictions the capital cities are experiencing now.
Residents of Perth and the neighboring Peel region must stay home except for urgent reasons after officials detected a third case, linked to the outbreak in Sydney.
And in Brisbane, the country's third largest city, people will be required to stay home except for essential work, health care, grocery shopping or exercise.

Sydney, home to a fifth of Australia's 25 million population, is under a two-week lockdown until July 9, while the lockdown in Darwin was extended for another 72 hours until Friday.
Concerns the Delta strain could spark significant outbreaks have also seen some form of restrictions in most other cities, with more than 20 million Australians, or about 80% of the population affected.
Authorities late on Monday said people age under 60 would now be able to get the AstraZeneca Covid-19 vaccine if approved by their doctor, who will be covered by a no-fault indemnity scheme, to ramp up a sluggish immunization drive.
Vaccinations have also been made mandatory for high-risk aged-care workers and employees in quarantine hotels.
"I'm absolutely comfortable about the rollout through the aged care sector," Australia's chief medical officer Paul Kelly told the Australian Broadcasting Corporation on Tuesday.
Lockdowns, swift contact tracing and strict social distancing rules have largely helped Australia keep its Covid-19 numbers relatively low, with just over 30,500 cases and 910 deaths -- but its vaccine rollout has hit several roadblocks.
Officials two weeks ago limited the use of AstraZeneca vaccines only to people over 60 due to blood clot concerns, while recommending Pfizer shots to everyone under 60 in a major change to its immunization drive.
Australia has fully vaccinated nearly 5% of its population, compared with more than 46% in the United States and 48% in the UK, according to Our World in Data. Its rates are more comparable with Indonesia and India, which, like much of the developing world, were left out of the agreements with pharmaceutical companies that secured hundreds of millions of vaccine doses for most of the rich world.
HaHaHello 2021-06-29 12:22:54

South Africa has entered at least two weeks of strict lockdown to combat a devastating third wave of Covid-19 linked to the more transmissible Delta variant.

The country is experiencing a massive surge in infections, President Cyril Ramaphosa said as he announced the new wideranging lockdown during a nationwide address on Sunday.
The third wave is currently centered on Gauteng, South Africa's economic engine. But scientists have said that it was a 'matter of days' before the impact of the Delta variant spreads to other provinces.

The restrictions are some of the strictest announced since the early months of the pandemic. All gatherings indoors and outdoors will be prohibited except for funerals and a curfew has been instituted from 9 pm and 4 am.
Alcohol sales are banned while travel in and out of worst-hit Gauteng province will be prohibited and restaurants will only be allowed for take-out and delivery; and schools closed.
"We are in the grip of a devastating wave that by all indications seems like it will be worse than those that preceded it. The peak of this third wave looks set to be higher than the previous two waves," said Ramaphosa, adding that the peak of the third wave could also last longer than the past two waves.
HaHaHello 2021-06-29 12:23:44

Vaccines have had little impact

Around 2.7 million people have received a Covid-19 vaccine shot in South Africa, one of the worst-hit countries on the African continent.
Public health experts have told CNN that the late start and relatively slow pace of vaccinations mean that vaccinations will have little positive impact on the third wave in the country.
"We are doing everything we can to make sure that the vaccines are here," said Ramaphosa, stressing that public health measures like masking and avoiding gatherings are critical.
Multiple health professionals in both the private and public sectors in Johannesburg, Gauteng's largest city, have described to CNN how hospitals are nearing capacity and struggling to accommodate the sick. Beds are limited, they say, but also a lack of trained staff to treat patients.
Some severe patients have been evacuated to other provinces to access critical care.
HaHaHello 2021-06-29 12:25:43

Delta variant spreading across Africa
The stricter lockdown measures come after a group of scientists briefed the public on Saturday with details on how quickly the Delta variant took over in the country.
"The new variant seems to not only be rising, but it has started to dominate the infections in South Africa," said Tulio de Oliveira, director of KZN Research Innovation & Sequencing Platform (KRISP). Early this year, KRISP identified a different variant, now known as the Beta variant, that ripped through South Africa in an intense second wave.
While more studies need to be completed, de Oliveira believes that genomic surveillance will show that the third wave in South Africa is directly linked to the emergence of the Delta variant.

The Delta variant is now spreading fast globally and is present in more than 85 known countries, he said. "In Africa, it seems to be very widespread also. With many sites in Southern Africa, East Africa, Central Africa, and West Africa."
In neighboring Namibia, the Delta variant has yet to be detected but the country is grappling with a spike in Covid infections with more than 500 casualties recorded from the viral disease in June, according to data by the country's health ministry.
Over 19,000 of Namibia's 2.5 million people are currently infected with Covid-19, stretching the country's beleaguered healthcare system.
According to records by the World Health Organization, nearly 85,000 people have tested positive to Covid in Namibia, and only around 123,000 vaccine doses were administered as of 24th June.
Namibia's public health facilities are also battling a shortage of oxygen supplies with many Covid patients requiring breathing aids.
HaHaHello 2021-06-29 12:32:06
Vietnam Mulls Slow Resumption of International Flights

The Los Angeles County Department of Public Health strongly recommended people wear masks indoors in public places -- regardless of vaccination status -- as a precautionary measure against the Delta variant.

In the week ending June 12, Delta variants comprised of nearly half of all variants sequenced, L.A. County -- the nation’s most populous -- said in a statement.
HaHaHello 2021-06-29 12:33:20
New Zealand to Reopen Travel Bubble With Some Australian States

Ho Chi Minh City, which began its anti-virus measures May 31, reported 3,492 local virus cases as of this morning out of the nationwide tally of 12,736 patients from late April, according to data from the health ministry.

Malaysia unveiled a 150 billion ringgit ($36 billion) package to help people through a nationwide lockdown that was extended for a second time with Covid infections still elevated.

The plan includes a 10 billion ringgit direct fiscal injection and will result in the government disbursing 10 billion ringgit in cash aid to the people by the end of the year, Prime Minister Muhyiddin Yassin said on Monday. The announcement marks the fourth stimulus package announced by the government this year.
HaHaHello 2021-06-29 13:01:29
U.S. Says Don’t Travel to UAE, Uganda

The U.S. increased its travel warning for the United Arab Emirates and four African countries to the highest risk level, telling residents not to go to those nations because of Covid-19.

The UAE has one of the world’s highest vaccination rates, but daily new cases have continued to hover around 2,000 since March. Liberia, Mozambique, Uganda, and Zambia have all experienced recent outbreaks and were put in the same Level 4 category as the UAE, according to a State Department statement.

The revisions follow updated guidance from the Centers for Disease Control and Prevention, which has also led to the lowering of advisories for countries such as Mexico, Canada, Japan and Ireland. 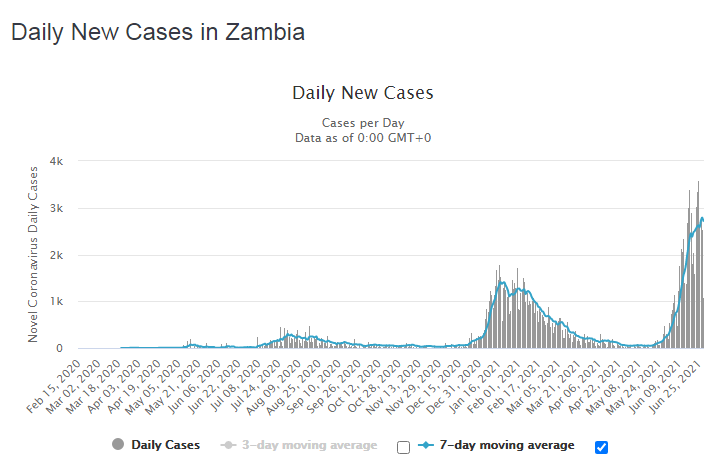 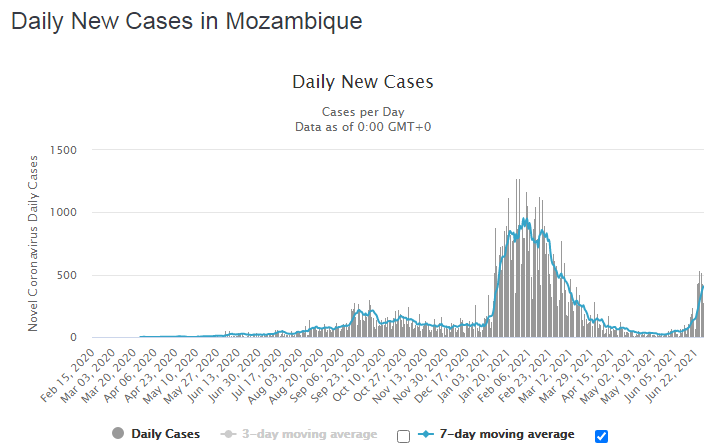