Premier's urgent plea as NSW Covid restrictions to be extended

NSW Premier Gladys Berejiklian says current Covid-19 restrictions in place across Sydney and surrounding areas will be extended beyond Wednesday as she called on residents to come forward and get tested.

The mandatory mask rule on public transport in Greater Sydney, Wollongong and Shellharbour local government areas was initially due to end on Wednesday at midnight after five days but the "level of concern" remains meaning an extension is inevitable.
"Given the situation we're in, and given that we don't want to see further restrictions imposed more broadly across our cities in our state, that in all likelihood, the existing conditions are likely to continue beyond the initial five days that we had asked people to do," Ms Berejiklian told reporters.

The outbreak has also led to increased restrictions for about one million residents in seven local government areas as health authorities look to curtail the spread of the virus.

Anyone shopping, working in hospitality or indoors must wear a mask unless eating or drinking if they live in the local government areas of Randwick, Bayside, Botany Bay, Inner West, City of Sydney, Waverley and Woollahra.

While testing exceeded 25,000 on Sunday, Ms Berejiklian said more was needed in the coming days.

“We want that rate to be higher," she said.

"We will have confidence in our policy going forward in relation to the current settings going forward, if those testing rates go up."
HaHaHello 2021-06-21 13:25:02 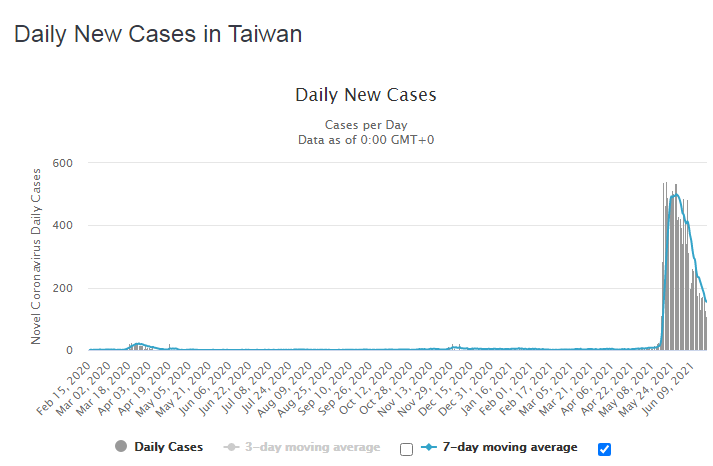 Over 10,000 new cases even on Monday (Recall the Sunday/Monday effect.

Vaccine clots more deadly than COVID in Australia this year

Australia's top medical officer on Monday urged countrymen who have received an AstraZeneca COVID shot to "not delay" getting the second dose – even though the vaccine has been linked to more deaths than COVID in Australia this year.

Chief Medical Officer Paul Kelly, after a National Cabinet meeting, reiterated the benefits of vaccination and encouraged Australians to stay vigilant for symptoms of COVID-19. He told Australia's ABC network that the benefits of the AstraZeneca vaccine in combating COVID-19 "far outweighed" the risks of developing a very rare blood clotting syndrome.

This guy is telling people to get the vaccine even though the vaccine has killed more people than the virus in Australia. I just cannot understand why so many maid people holding the very senior positions in the authority. I give up and just let people die without doing anything. This is because I cannot defeat the propaganda machines of the governments.
國泰飛機飛泰國 2021-06-22 09:54:37
Two women in Australia have died from the blood clots. The only COVID fatality this year was an 80-year-old traveler who died in April after being infected overseas and diagnosed in hotel quarantine. Last week authorities recommended that the AstraZeneca vaccine be given only to people 60 or over; people 50-59 were encouraged to get the Pfizer vaccine instead.

不過新聞係要咁樣玩數字 吸引眼球
HaHaHello 2021-06-22 21:41:51
(1) The number of people killed ny the vaccine in Australia is far more than 2. Only 2 of them are 100% fully linked to the vaccine. So, the report is actually highly biased to help the Australia government.

(2) There is only ONE people killed in this year up to now, and this means that Australia is NOT in emergency so Australia should NOT administrate vaccine that is only authorized for emergency use.

(3) Very few doses have been administrated in Australia because the Australians are smart enough not to take the vaccine when they are so safe. The result is that the number of people get killed by the vaccine is relative small.


You shut up! Fuck of your ma!

The truth is that most of the government in the world are downplaying the number of people killed by the vaccines.
HaHaHello 2021-06-22 22:07:09
Another example of downplaying the risk of vaccine (taking from my earlier email:

COVID-19 vaccine heart problems in teens, young adults: What we know https://www.usatoday.com/story/news/health/2021/05/24/covid-vaccine-heart-problems-teens-young-adults-what-we-know/5241271001/:
The safety group did not specify which vaccine was given in these cases. …

“It’s terrific that things are being transparent. … It shows the surveillance systems are working,” said Dr. Lawrence Kleinman, professor and vice chair of the department of pediatrics at Rutgers Robert Wood Johnson Medical School.

…The vaccine safety group says the “relatively few” reports of myocarditis “appear to be mild” and are below the expected baseline rates.

They have not even told us how many cases and which vaccine was given and they called this is transparent! My god, they are so brave to say this lie to the public. Am I really so stupid to believe all these rubbish?

So USAToday is helping the governments, in particular, the US Government to downplaying the risk of the vaccine.

Notice that the effect of the holiday on last Monday is still showing up in the 7-day moving average. This effect will completely evaporate tomorrow so that we can see the clear picture.

Sorry for reporting this so late because I have been too busy all day long today and have no time to write. Now, I am too tire to report more.

I posted the above post just try to report the fact.

Then what will you recommend Peru to do? I will tell them this:
Although the vaccine might kill, COVID-19 virus has and will kill many more in Peru. So you really need to consider using your health and even your life to beat on the vaccine, because you do not really have choices.

I do know that Peru has a very high vaccination rate but the Chinese vaccine fails to stop the virus. But this is the only hope Peru has right now.

Think about the issue this way:
The side-effects of the older medicines for cancer are so serious that many people have stopped taking the medicines in the middle of the course of treatment. Furthermore, the effect of those medicines are so low that almost all these people are finally killed by the cancer.
Even so, people took these medicines because this is their only hope.

Please forget the politic, money and other ideologies and do something really can save lives. Too many of us have been killed.
HaHaHello 2021-06-23 11:12:59

You can obtain the above by going to https://www.worldometers.info/coronavirus/#countriesand click the heading "Deaths/1M pop" once
HaHaHello 2021-06-23 11:17:26 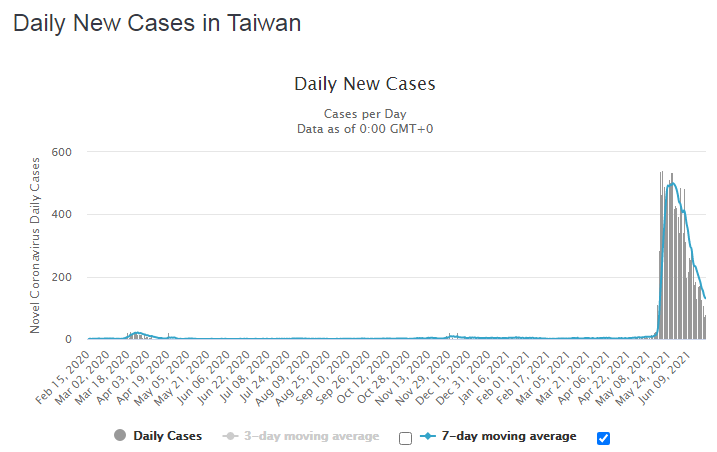 The improvement has been slowed down a lot even with the help of the holiday on last Monday. We will see the full picture tomorrow. Even so, it is clearly that Taiwan has improved a lot in the past 7 days.
HaHaHello 2021-06-23 11:39:18
Yes. After such a long lockdown and the help of warmer(hot) weather, a lot of places have been re-opening.