The Odyssey of the Seas' initial sailings, which the cruise line had laid out as six- and eight-night Southern and Western Caribbean cruises from Fort Lauderdale, Florida, from July 3 to July 31, are being canceled as a precaution, Royal Caribbean spokesperson Lyan Sierra-Caro told USA TODAY. The launch will be postponed until July 31, when the first sailing with paying passengers is now scheduled to depart. Four sailings were scrapped in total.
HaHaHello 2021-06-17 12:56:38

A new report by FAIR Health shows that almost a quarter of coronavirus patients develop long-lasting symptoms or Long COVID. The study found that some symptoms were more prevalent in certain age groups or demographics. Older patients had a higher chance of developing high cholesterol, while younger patients were more likely to develop gastrointestinal issues after diagnosis.

The journal analyzed nearly 2 million private health care claim records of patients with COVID-19, excluding those with chronic conditions such as cancer and HIV.

The Oxford-AstraZeneca (AZN.L) coronavirus vaccine was put under more pressure this weekend as the leading EU drugs regulator recommended that countries should avoid giving it to people over the age of 60.

The shot has been under intense scrutiny since its rollout began due to reports of extremely rare blood clots. Reuters reported that the head of the EU COVID-19 task force was quoted on Sunday recommending using other vaccines for over 60s as they become available.

The European Medicines Agency (EMA) considers the vaccine safe for all age groups, and has been clear in its advice that the benefits of taking the vaccine outweigh the risks, however some member states have restricted its use in the older population.

The UK has also previously recommended using an alternative to the AstraZeneca shot for those under the age of 40.

"In a pandemic context, our position was and is that the risk-benefit ratio remains favourable for all age groups," COVID-19 task force chief Marco Cavaleri told the Italian newspaper La Stampa.

Cavaleri noted that due to caseloads falling and the fact that younger people are less exposed to the risks of COVID, using vaccines with mRNA technology, such as ones from Moderna and Pfizer-BioNTech, would be preferable.

The news follows the Italian government restricting the rollout of the AstraZeneca vaccine to people aged over 60.

Some scientists worry that the back and forth on the AstraZeneca vaccine, which was one of the first to be approved by regulators, has undermined confidence in the jab.

Roberto Burioni, one of Italy’s leading virologists, said in an interview that government regulators and AstraZeneca “communicated very very badly.”

“We are losing the trust of even the most enthusiastic people.”

Even with the delay in England’s lockdown lifting, Covid cases and deaths will still rise

The prime minister has announced that England is not yet able to remove the final public health measures that are in place because of the Covid-19 pandemic, and that these measures are likely to remain until 19 July. So why is this step needed, and what are the potential benefits of an additional four weeks of restrictions? Will this be enough to prevent a further wave?

The Delta variant of Sars-CoV-2 (first identified in India) has become the most common strain in the UK over the past few weeks and is spreading rapidly as a result of its being more transmissible than the Alpha (Kent) variant responsible for the January 2021 wave – the number of infections is doubling every seven to 10 days at present.

The Delta variant also appears more likely to require hospital admission than the previous variants, and the number of people being admitted to hospital and to intensive care is on the rise once again. Today there are around 1,000 people in hospital with confirmed Covid-19 in England, 160 of them requiring mechanical ventilation. That’s the equivalent of around 10 medium-sized intensive care units, just for people with Covid-19.

The easing of public health measures over the past few months was always going to result in an increased number of Sars-CoV-2 infections. More people having more social interactions, and in closer proximity, increases the chance of viral transmission. However, we now have vaccines that are excellent at reducing the severe consequences of Covid (two doses of either Pfizer/BioNTech or Oxford/AstraZeneca are more than 92% effective at reducing the need for admission to hospital).

Yet we still have to be concerned about the rising number of people testing positive for the virus. To date, 57% of UK adults have received two doses of a Covid vaccine, and 79% have received a single dose. But around 4.5 million of the former received their second dose in the past two weeks, so have not yet developed optimal immune protection.

A delay until 19 July before releasing the restrictions will allow all those aged over 50, and those who are clinically extremely vulnerable, to have second doses, and for those vaccinations to have taken effect. And by then it is likely that all adults will have been offered their first dose of the vaccines, and two-thirds will have had a second dose – which is likely to reduce hospital admissions by between 30% and 50%.

Yet it is important to be clear that the restrictions that have already been relaxed over the past few months are likely to lead to further increases in infections, hospitalisations and deaths in the coming weeks: the pause announced by Boris Johnson on Monday means we have taken our foot off the accelerator but not applied the brakes.

The four-week delay also means we are due to end restrictions as the school summer holidays begin. While it is critically important for children to be in the classroom, it is inescapable that schools are a setting where there is increased viral transmission – there is little social distancing in the classroom, and pupils are no longer required to wear masks. It is possible that in the autumn, when students return for the new academic year, we may need to revisit what measures are needed in our schools.
HaHaHello 2021-06-17 16:31:41
20 NEW CASES OF LOCALLY TRANSMITTED COVID-19 INFECTION

Singapore:
1. As of 17 June 2021, 12pm, the Ministry of Health (MOH) has preliminarily confirmed 20 new cases of locally transmitted COVID-19 infection. 18 are linked to previous cases, amongst whom 13 have already been placed on quarantine, and 5 were detected through surveillance. The remaining 2 cases are currently unlinked. Based on our investigations so far, the cases are in the community, and there are no new cases in the dormitories.

2. In addition, there are 7 imported cases, who have already been placed on Stay-Home Notice or isolated upon arrival in Singapore. Of these, 3 are returning Singaporeans or Singapore Permanent Residents.

3. In total, there are 27 new cases of COVID-19 infection in Singapore today.

4. We are still working through the details of the cases, and further updates will be shared via the MOH press release that will be issued tonight.
HaHaHello 2021-06-17 16:35:05
The 7-day moving average has been increased in the past few days, so it is worsening.
The travel bubble between Hong Kong and Monkeypore will not started!

Although I might be the first person to tell the world to use the 7-day moving average to determine whether the pandemic is improving or worsening, I use the 3-day moving average for Russia because there is no Sunday/Monday effect in Russia. That is, the testing laboratories in Russia will have the same testing capacity on Saturday and Sunday as on weekdays. 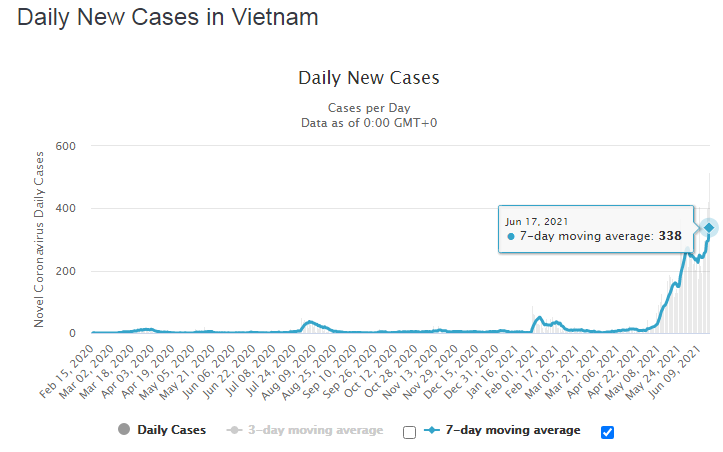 The 7-day moving average curve is going up almost vertically so that the situation is worsening truely rapidly. 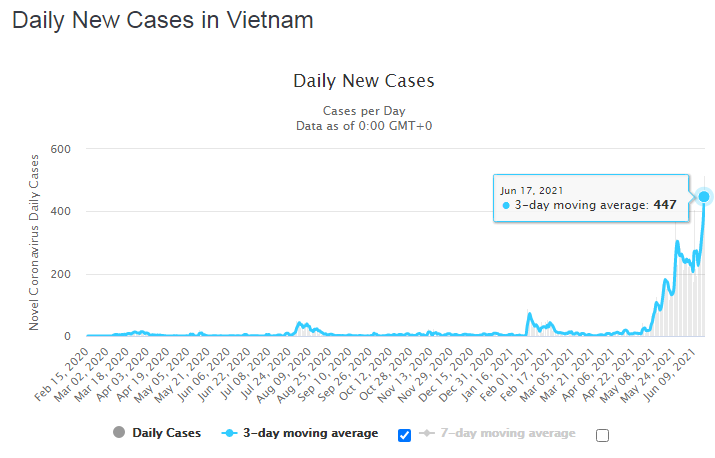 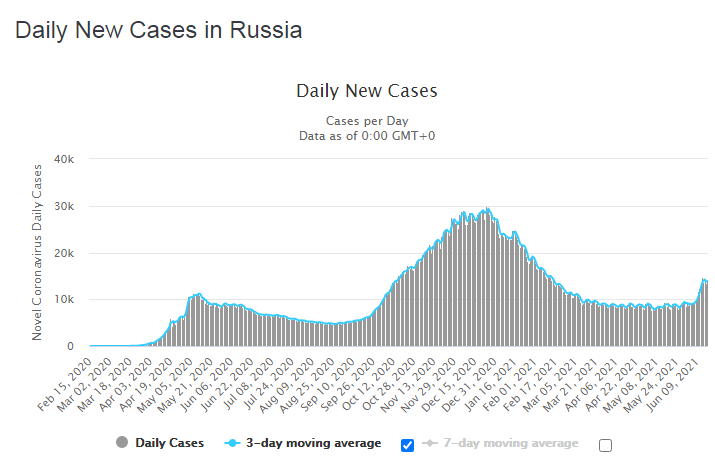 The 3-day moving average suggests that the situation in Russia has a very small improvement.

Please also note that there are data fluctuations in the 3-day moving average due to daily fluctuations of the new cases.

However, the 7-day moving average is still going up, but the rate of increasing is has been reduced: 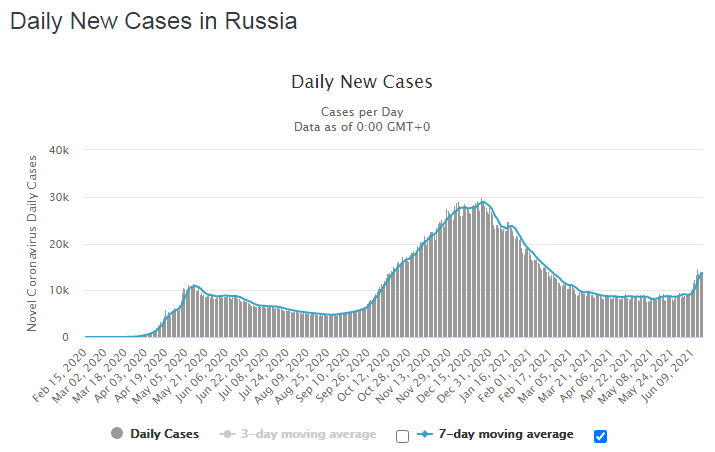 Also note that the 7-day moving average has smooth out all the daily fluctautions.

As NSW stares down its latest Covid-19 cluster, a leading epidemiologist has warned Sydney could be "in trouble" if restrictions aren't imposed in a timely fashion.

UNSW epidemiologist Mary-Louise McLaws has called for vigilance and restrictions to be brought in after the cluster grew to three known cases on Thursday.

While the northern Sydney beaches cluster before Christmas last year grew to more than 120 cases before health authorities managed to suppress the outbreak with localised restrictions, Prof McLaws' concern is largely about the more infectious variant that has made its way to Australian shores.

"We're in trouble, now we know the strain is Delta," she told the ABC.


Police in the northern Indian state of Uttarakhand have registered a case against three private labs for filing fake Covid reports.

Media reports say fake names, mobile numbers and addresses were used in more than 100,000 tests during the Kumbh festival in April.

The private labs were hired by the state to screen visitors for Covid.

Uttarakhand was criticised for holding the festival, which attracted millions of people, during the pandemic.

Reports from different states suggested that those who returned from the festival ended up infecting a large number of people.

Unmasked crowds thronged the Kumbh festival in April even as several Indian cities grappled with a severe shortage of oxygen and hospital beds.

At the time, officials said that every visitor was being screened for Covid. Private labs, based in Haryana and Delhi, were hired to conduct a majority of the tests.

The same phone numbers and addresses were used in hundreds of Covid reports.

"Orders have been issued to file a case against labs from Delhi and Haryana, which conducted testing at five places in Haridwar during Kumbh Mela," Subodh Uniyal, Uttarakhand government spokesperson, told ANI news agency.

The Kumbh Mela is the biggest Hindu festival - it draws people from all parts of India and the world. But experts had warned in March that the festival should be cancelled because of an impending second wave. But the government decided to go ahead, allowing people to visit from across the country.

Reports of fake Covid tests have also emerged from the northern state of Bihar where some primary healthcare centres have been accused of fudging data.
HaHaHello 2021-06-18 13:47:15

"Africa is in the midst of a full-blown third wave. The sobering trajectory of surging cases should rouse everyone into urgent action," Matshidiso Moeti, WHO regional director for Africa, told an online news conference.

The UN health agency said a lack of adherence to social distancing and other measures had fuelled the new surge, along with cold winter weather in southern Africa and the spread of more transmissible variants.

In 22 African countries, cases rose by more than 20 percent in the week to June 13, with the Democratic Republic of the Congo, Namibia and Uganda reporting their highest levels of new weekly cases since the pandemic began, according to WHO data.
HaHaHello 2021-06-18 13:49:49

The Russian capital Moscow is also seeing a sudden jump on Covid-19 cases.

"It's most likely we are facing new, more aggressive variants which spread more quickly," the city's mayor Sergei Sobyanin told a video conference.

If we look at the 3-day moving average, then it suggests that there are no improvements.

We need a few more days to determine the new trend.