(Reuters) - Johanna Konta has withdrawn from the Tokyo Olympics after a positive test for COVID-19 affected her preparations, the British number one said on Tuesday.

Konta was forced to withdraw from Wimbledon a day before the Grand Slam after a member of her team tested positive for COVID-19. But the 30-year-old said she also developed symptoms while self-isolating before testing positive for the virus.

"As a result, I have been unable to train for the last two and a half weeks and sadly, this has put my body in a situation where I am unable to ask it to be fully ready in time for the Olympic Games in Tokyo," Konta said on Twitter.

"This is a heart-breaking reality for me, as representing Team GB at the Olympic Games in Rio in 2016 is one of my most treasured memories from my career so far.

"I'll be doing my best to get myself back to full health and fitness and ready to be competing again soon. During this time, I'll also be glued to my TV cheering on my fellow Team GB athletes competing in Tokyo and I hope you will all join me."

Konta reached the quarter-finals at the 2016 Rio Games, losing in straight sets to Germany's Angelique Kerber.

Her withdrawal from Wimbledon was a cruel blow as she had won the Nottingham grasscourt title in the build-up to the Grand Slam. 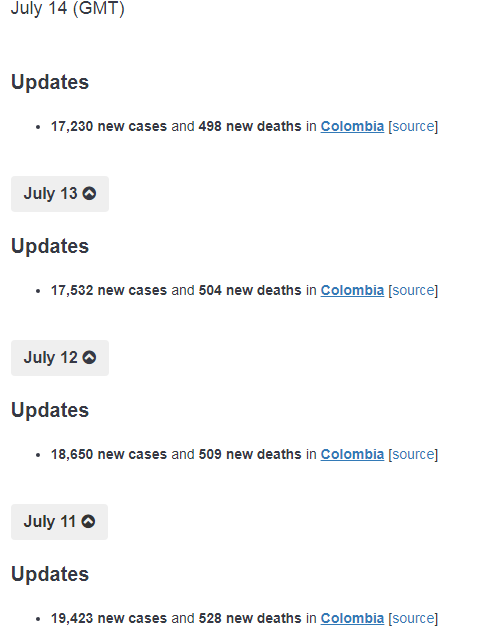 HaHaHello 2021-07-15 08:01:35
The number of deaths in the world is increasing, but the death rate is dropping because out (human) immune system is stronger in the summer. This happened in last summer.

However, all the governments are partially lying to say that the vaccination reduced the death rate.

As I said earlier,:
1. UK has been in hell.
2. The number of deaths would not be huge in the summer because our immune system would be stronger in the summer.

Furthermore, UK has only reported COVID-19 deaths only when the people are dead within 28 days after tested positive. Now, most of the infected British are younger and can stay alive for more 28 days, so the reported deaths is lower than the actual number.

Cases and deaths from COVID-19 rose in more than half of U.S. states over the past week as vaccination rates slow and the highly transmissible delta variant spreads across the globe.

In Missouri, where cases are surging, one county asked the state for funding Wednesday to establish an "alternate care site" for COVID-19 patients.

"Over the past week, we have seen dramatic increases in COVID-19-related cases," Katie Towns, interim director for the Springfield-Greene County Health Department, said at a press conference. "We need help."

Hospital admissions are also expected to increase over the next four weeks, an ensemble forecast by the Centers for Disease Control and Prevention predicted Wednesday. The U.S. may see up to 11,000 new hospital admissions reported on Aug. 9, according to the forecast.
HaHaHello 2021-07-15 09:56:46
Los Angeles County is reporting the fifth straight day of more than 1,000 new cases. County officials said the five-day average of cases is 1,095 – a jump of more than 500% in just one month.
HaHaHello 2021-07-15 10:00:21
Italy is banning mammoth cruise liners from sailing into Venice, which risked being declared an imperiled world heritage site by the United Nations within days.
HaHaHello 2021-07-15 10:08:16

Former Vice President Mike Pence, in a blistering speech about China on Wednesday, said the United States must demand that Chinese leaders "come clean" about the origins of COVID-19.

"The evidence strongly suggests the coronavirus leapt out of the Chinese lab," Pence said during remarks at the Heritage Foundation, a conservative think tank where he is a visiting fellow.

Pence, who lead the Trump administration's coronavirus task force, did not elaborate on that evidence.

In a paper posted Wednesday, a team of 21 virologists said there's currently no evidence that the coronavirus began in a lab. But there is "substantial body of scientific evidence supporting a zoonotic origin," the scientists wrote.