It is the lockdown rather than the vaccination. The British scientists have drawn the correct conclusion. Please go back to read what I have said, I don't want to write it again.

You cannot just look at the data and draw conclusion.
You need to analyze the data carefully.

But just data analysis is still not enough. Something cannot be told by the data.

The former chairman of the American Federal Reverse is great and people called him "King of the Universe" just because he had set up regular meetings to discuss what the economic data could not tell.

When I look at the data of this pandemic, I do more than just analyse the data. I have to read a lot of reports about a country so that I can really know what actually happen in that country. This extra information helps me to understand and interpret the given data.

You have to know what the people on the street are thinking and doing before you can truly understand the data.

The latest update brings the total to 123 cases since July 1. Of the new cases, three – including the athlete – were non-residents of Japan, while the rest were Games contractors who are residents. Olympic organizers do not identify athletes by name when they test positive.

Organizers reported a three-day total of 74,528 tests from July 20-22, with 22 confirmed positives in that time.

The Age, an Australian news outlet, reported Saturday that a top government COVID-19 advisor said he did not believe organizers were prepared for worst-case scenarios.

Hitoshi Oshitani, a member of the federal government’s COVID-19 advisory panel and the head of virology at the Tohoku University School of Medicine, said the Olympic Village presents a special risk with participants sharing rooms.

Tokyo 2020 spokesman Masa Takaya said organizers had coordinated with the national and Tokyo metropolitan governments in developing the playbooks, which outline health and safety protocols for all Games stakeholders.

The first match of the beach volleyball tournament has been canceled due to a Czech player tested positive for COVID-19.

The Czech Republic was scheduled to play Japan, but the Japanese pair of Megumi Murakami and Miki Ishii will be declared the winners by default.

In rowing, Dutch rower Finn Florijn has been ruled out of the Olympics after testing positive for COVID-19, hours before before he was scheduled to compete.

After not qualifying for the men's single sculls quarterfinals on Friday, the 21-year-old was scheduled to participate in second chance race on Saturday. However, the Royal Dutch Rowing Federation said roughly four hours before the event that Florjin tested positive for the virus.
CDC 2021-07-24 16:26:09

If you look at , for example, Florida, the number of desths hasjust going up rapidly.

The lockdown in UK happened in the winter.

All I can say is that you do not have a clear mind. You get confused just because you have mixed things up.

Can you see the rapid rise in the deaths right now (in Florida) on this graph? This rise is so fast that this is almost a vertical line on the right end. 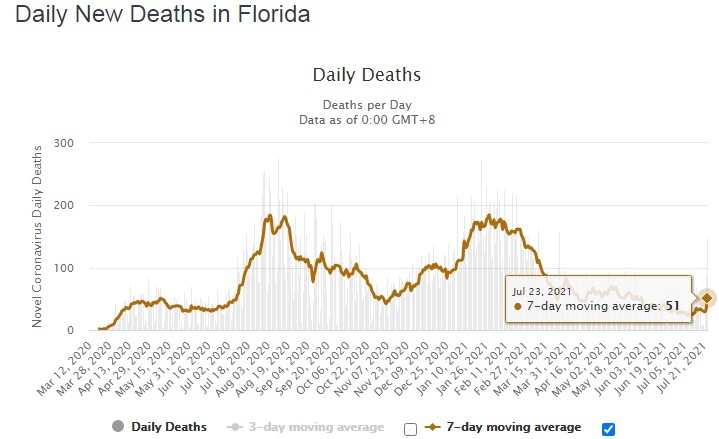 England has very few air conditioners, even the Tube in London does not air-conditioners so that English people will suffer heat stroke when the temperature reaches only 26 degree/C.

When the fall/autumn comes, UK will go deeper inthe Hell, but Florida will improve a lot when the cooler days come.

TOKYO – A staff member in the U.S. delegation has tested positive for coronavirus, the U.S. Olympic and Paralympic Committee said Sunday.

It was the only confirmed positive among 1,038 U.S. delegates.

Steps to understand the COVID_19 Data

1. Determine whether the reported data is real.
For example, I took a lot of time to study the data from Vietnam before I accepted its data. People (including myself) did not trust Vietnam. This is very important because some countries can do crazy things. For examples,
(a) https://news.ltn.com.tw/news/world/breakingnews/3135447 : 「死亡者」計入痊癒人數 智利神操作驚呆全球

(b) My rejection of the data from Iran created a heat debate at 國際疫情討論區 series last year. Finally, someone shown a news report in which Iran claimed to have the world most advanced virus detaction method. The machine they used looked like a land mine detector, and they held the detector on road side and pointed the device toward the passing cars. Iran claimed that the device had already proved that the people inside the moving car are free of virus!

So, you really need to know what really happens in a country before you can analyze the data from that country.