The Ministry of Health (MOH) on Sunday (27 June) announced the detection of 14 new cases of COVID-19 infection in Singapore, taking the country's total case count to 62,544.

Of the new cases, 12 are in the community, said MOH in a news release. Eleven of the community cases are linked to past cases, with 10 already placed on quarantine and one detected through surveillance.

There is one unlinked community case and no new cases at the migrant worker dormitories. Out of the two new imported cases, one is a returning permanent resident.

In its nightly update on Saturday, MOH said that an 84-year-old Singaporean woman had died from complications due to COVID-19 infection.

She was tested for COVID-19 on 15 June as part of the community surveillance testing for visitors to 115 and 116 Bukit Merah View, and was confirmed to have COVID-19 infection on the same day. She had not been vaccinated against COVID-19, and had a history of cancer, hypertension and hyperlipidaemia, said MOH.

Seasonal flooding of the Ganges is flushing out shallow graves and exposing some of the hundreds of bodies that were buried by the river during India's recent Covid-19 surge.

Neeraj Kumar Singh, an official in the northern city of Allahabad, said that almost 150 bodies have had to be cremated in the past three weeks.

"We are not exhuming any bodies but only those which are floating up due to rising water levels are being cremated," he said.

"The area is spread over a kilometre (half a mile) and our guess is there are around 500-600 bodies buried," Singh told AFP.

"Every precaution is taken in dealing with the bodies while performing their final rites."

Most are believed to have died from coronavirus in April and May when India was hit by a spike in infections that overwhelmed hospitals in many areas.

Some families were unable to afford firewood for traditional Hindu cremations so bodies were immersed in the Ganges or buried in sandbanks adjacent to the river.

These are now becoming flooded because of annual monsoon rains swelling the river, washing away the sand and revealing the corpses.

The number of such graves has stoked suspicions that India's total deaths from the pandemic may be over a million, several times the official toll of almost 400,000.
HaHaHello 2021-06-27 16:14:03

Tens of thousands of anti-lockdown protesters took the streets of central London on Saturday 26 June, on a day with numerous protests planned in the capital. The protest against Covid restrictions was given added impetus by the news that Health Secretary Matt Hancock, involved in imposing coronavirus restrictions on the UK population, was himself breaking the rules with a romantic tryst with a colleague. Nearby, a pro-Palestine, pro-BLM, anti-austerity, anti-government protest was also happening outside parliament.

Look, the protesters do not wear face masks when the thirdwave surge quickly right now. Then you should understand why I said yesterday that UK was already in hell. 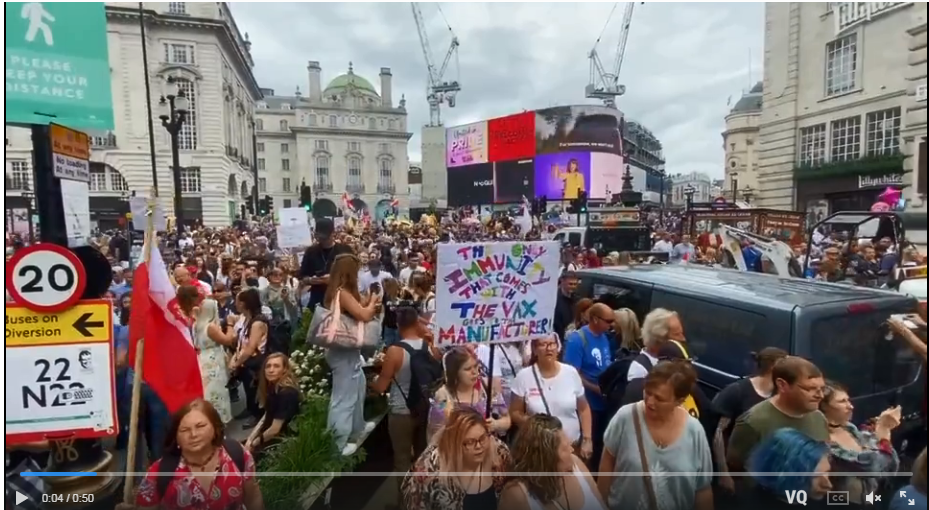 Government should not ‘rush’ into easing restrictions on July 19 – expert

The Government should not “rush” into easing Covid-19 restrictions in England in July, but data is looking “encouraging”, an expert has said.

Earlier this month, concerns over the spread of the Delta variant led to Prime Minister Boris Johnson pushing back the June 21 target date to remove all legal limits on social contact to July 19.

Professor Sir Peter Horby, chairman of the New and Emerging Respiratory Virus Threats Advisory Group (Nervtag), said: “We always have to be driven by the data, not the dates.”

He told the the BBC’s Andrew Marr Show: “So we’re watching it very carefully and there will be a lot of analysis of the data coming up to that date, to make sure we’re comfortable with that release.

Cases in Turkey Decline to 2021 Low

Saudi Arabia stressed the importance of getting two vaccine doses for all those attending Hajj this year, the Hajj and Umra Ministry said on Sunday.

The Arab kingdom earlier said it will only allow 60,000 nationals and residents to attend the annual pilgrimage for the second year in a row, in an effort to contain the spread of the coronavirus.
HaHaHello 2021-06-28 13:41:53

All tourists from Russia will need to present a negative PCR or rapid test for Covid-19 to enter Greece as of June 30, even if they are vaccinated.

Greece amended its policy given the rise in delta variant cases in Russia, the tourism ministry said Sunday. All tourists from Russia will also be tested for coronavirus upon their arrival.

The decision comes after a two-day EU summit in which southern European countries came under fire for letting in tourists who’ve had unauthorized vaccines.
HaHaHello 2021-06-28 13:44:43

Ireland’s prime minister said the government will decide early this week on whether to delay a planned reopening of indoor hospitality venues beyond July 5 over concerns about the delta variant.

Nphet, the Irish public health agency, is likely to meet on Monday in advance of a planned Tuesday Cabinet meeting, Taoiseach Micheal Martinsaid Sunday on RTE Television, according to the Irish Independent newspaper.

Martin said the nation’s calculus is different now from when it locked down over Christmas. Data from the European Center for Disease Prevention and Control show Ireland has the highest uptake in Europe of Covid vaccines among people 50 or older.
HaHaHello 2021-06-28 13:52:25

Bangladesh will halt public transport from Monday as the daily Covid death count surges to a record, the Cabinet Division said in a notice on Sunday. All shopping malls, tourist sites, resorts and places of entertainment will also remain closed under the new rules.


Denmark recorded its first case of the delta-plus variant, a mutation of the strain first discovered in India, the state agency dealing with infectious diseases said in a statement. The variant was brought in by an infected passenger traveling from Portugal by plane. The passenger and the other people on board the plane are being tracked down and will have to go into isolation, the agency said.
HaHaHello 2021-06-28 13:56:48


Sweden’s state epidemiologist said he expects all virus restrictions will have ended by November. By then, Sweden will probably have removed its work from home recommendation and social distance requirement, Anders Tegnell said in an interview published in the DN newspaper.
HaHaHello 2021-06-28 13:57:33

New Zealand extended restrictions in the Wellington region for two days despite finding no evidence yet that an Australian tourist with Covid-19 spread the virus while visiting the city last weekend.

Dozens Came Down With COVID-19 on Everest. Nepal Says It Never Happened.

KATHMANDU, Nepal — In April at Mount Everest base camp, where climbers acclimatize to the extreme altitude before heading to the summit of the world’s highest peak, Jangbu Sherpa fell ill with a cough and fever.

At 17,590 feet, his symptoms quickly worsened. The expedition company that had hired Sherpa to help a Bahraini prince climb Everest had him airlifted to a hospital in the capital, Kathmandu, where he tested positive for COVID-19.