NOTE from the UK government [source: cases > about]: "The way cases are reported in England changed on 21 May 2021. Reported cases are sometimes removed if subsequent tests are negative. This happens when cases identified through a positive rapid lateral flow test are followed by polymerase chain reaction (PCR) tests within 3 days that are all negative. These cases are removed daily from 21 May 2021. Because of this, the number of newly-reported cases may not be the same as the difference between the total number of reported cases from one day to the next. The number of newly-reported cases in England and the UK is adjusted to take this into account, but the numbers for regions and local authorities are not adjusted. This means that for regions and local authorities, this figure does not show the actual number of new cases reported on that date." 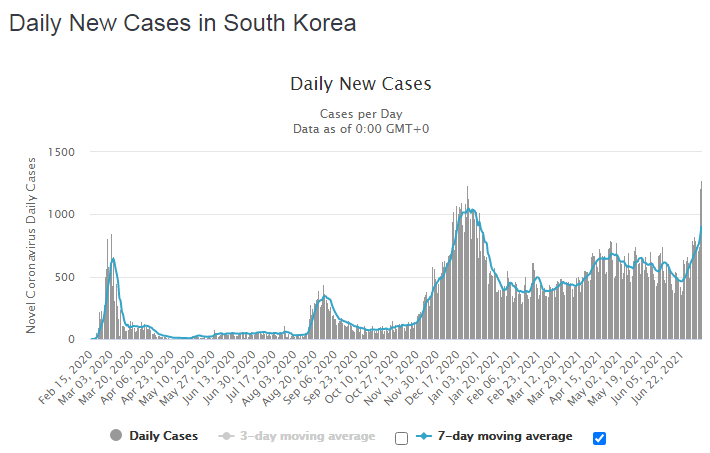 There will be no fans at the Tokyo Olympics, organizers said Thursday following the declaration of a new state of emergency in the host city.

Japanese Prime Minister Yoshihide Suga announced the state of emergency for Tokyo is to take effect Monday and last through Aug. 22. The Games begin July 23 and end Aug. 8.

“The priority will be to determine safe and secure Games,” Tokyo 2020 president Seiko Hashimoto said at a news conference following a meeting with the Tokyo Metropolitan Government, the government of Japan, the International Olympic Committee and International Paralympic Committee.

Organizers had previously announced that foreign spectators would not be allowed at the Games, but until Thursday there was still hope Japanese fans could attend venues at partial capacity.
HaHaHello 2021-07-09 14:15:47