遊行無用，勇武無用，連儂牆無用，民意開始逆轉，開始攰，好想死，仲唔散係弱智，仲唔衝係嘥氣，條例已經死亡，警察已經內鬨
The Protest march is useless! Vigilante is futile! Lennon Wall is pointless! Public opinions are against us! Feeling exhausted, and wanna die! It's impossible not to break down! Stay put is pointless! The bill is dead! The police are conflicting internally!

Has anyone noticed that some just love to keep looping the following points?

The Protest march is useless! Silent protests are ineffective! Lennon Wall is meaningless! Road blockades have no effects! Lashing out is futile! Vigilante is pointless!

March attendance had lowered. Support of the vigilantes cooled down. Sit-in is boring. The Lennon wall is dumb. Heard a lot of opposing voices as if the public opinions are already turning against us."

So tired. So bored. So agitated. Let's give up!

Protest marches aren't radical enough, and vigilantes deserve to go to jail! Chanting a few slogans and signing petition letters are just things to make myself feel better, and hunger strikes are self-mutilation! Issuing statements are so pretentious! Street promotions are foolish! Speaking in public won't get any attention! Street conflicts are illegal! Flashing laser beams is assault! Group assault against police imposters is raiding! Throwing objects is assault! Digging up bricks is an attack!

Martyrs' family would get compensations! Those wishing to stay behind after raiding the LegCo (Translator note: on July 1, 2019) all have terminal illnesses! All those free to engage in lashing are jobless! The youngsters are being manipulated! Christians should never take part in politics! Only losers would want to burn together!

Hong Kong is hopeless! Whatever one does is fucking stupid! Most Hongkongers won't buy into your ideas! You are the minority! What you wish to do has been done in the past already, and they were all ineffective! Stop dreaming!

Suspending the bill is already an enormous concession! Putting it to sleep is also a considerable yielding! The Police already started infighting, and the pro-Beijing camp also has internal conflicts! There are frictions between the Xi clan and the Jiang clan!

I can't get to work! Too many people! Too little people! Too hot! Too rainy! Too cold! Too poor! Too rich!

The smart do the talking, and the stupid do the fight!

(Editor's note: scroll down for part 2

Hurry, immigrate! Hong Kong is hopeless! Only retards would stay behind! I wish to live abroad! You don't have a roof over your head like the others! Others have money, but you don't! Hurry, immigrate!
===================
Yuri Bezmenov, a KGB special agent, sought refuge in the US back in 1970. Once he set foot on US soil, he disclosed what the KGB did to subvert enemy/opposing nations. It usually began with demoralization, causing the entire society to feel helpless. What follows would be an incoherent public, with coldness amongst them leading to it being torn apart from within and resulting in a complete meltdown. Then the USSR would win the battle without fighting. This whole process is theorized as "Subversion," and the actions that drive subversion is known as active measures / активные мероприятия.

In 2019, the People's Republic of China employed the same theory to crumble Hong Kong without the use of the army.

The following is the original English version, the detailed Chinese version for RedDragon1 members and the lecture from Yuri himself (very detailed, but there aren't any Chinese subtitles until now): 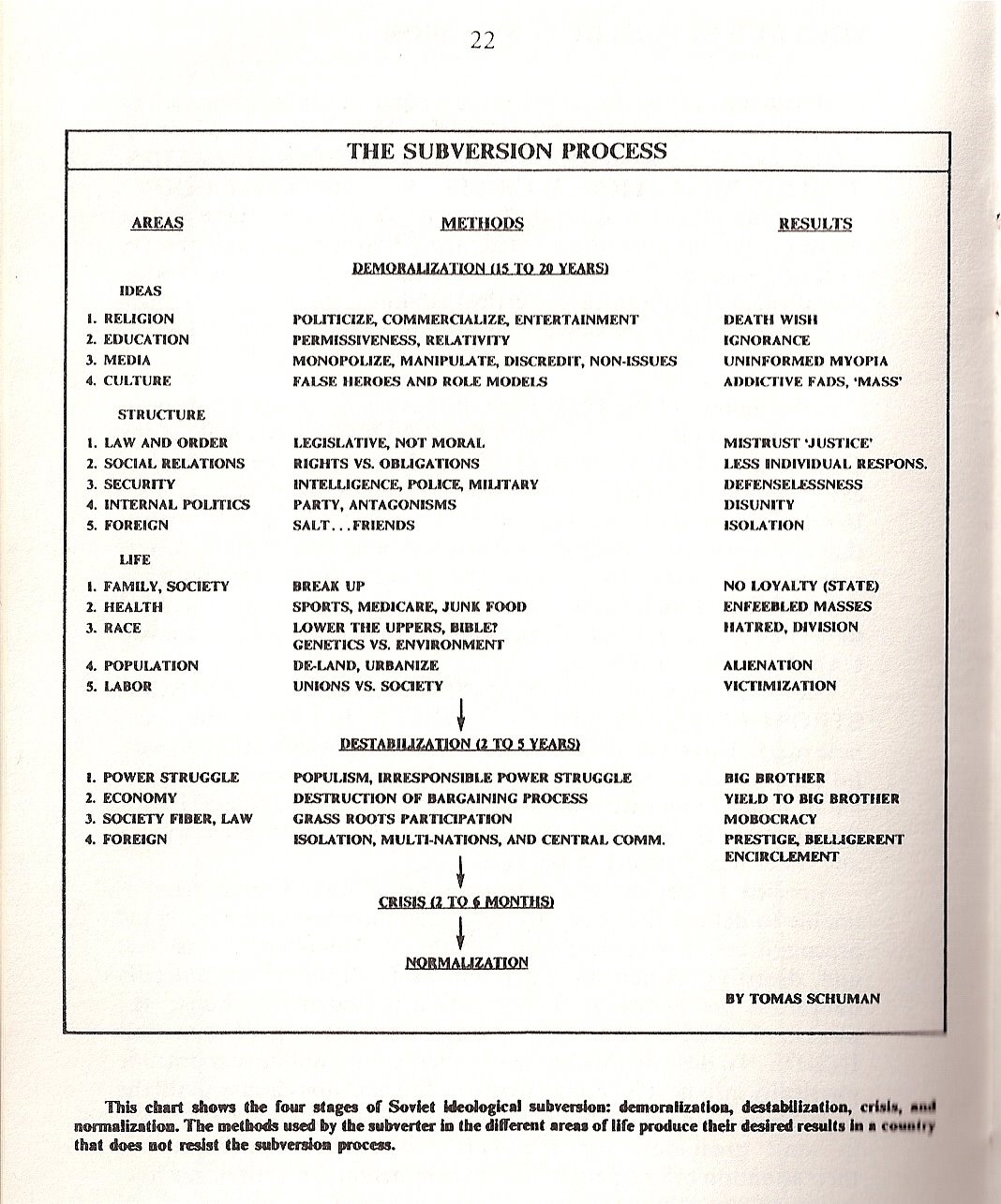 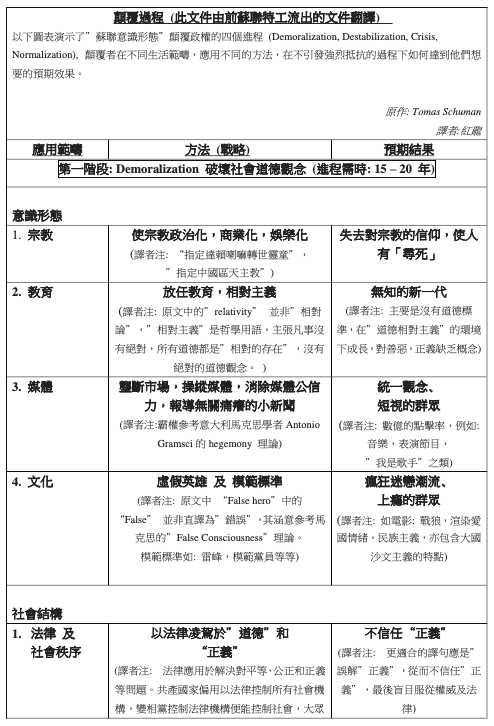 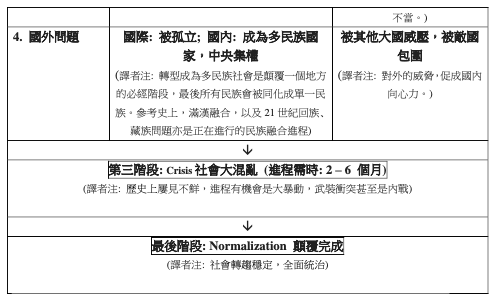 If you don't have time to watch the whole lecture, the last two Subversion steps in the diagram weren't explained clearly:

"Crisis" means to cause the machine that runs the society to fail. That is when the bank stops functioning, the Legislative Council stops meetings, and the court stops ruling. At the same time, alternative government organizations such as the peoples' court will emerge.

Before "Crisis" is normalized, there are two possible outcomes: International intervention (war among countries), or civil war. If none of these two outcomes happen, then it'll skip to the last step directly:

"Normalized" means "Social unrest is completely prevented by intruders". In the case of the Soviet Union, Russian tanks entered the city, killed all the pro-Soviet's spies and politicians (because they were useless for Russia). The outsider, Russians, cleaned up all the opposition and "normalized" this crisis.

**Do you realize that many of those tricks taught by Yuri are already used in Hong Kong? In fact, it's been done since 1997.

Know yourself and know your enemy. It's time for Hongkongers to learn how the Communist's intelligence agencies treat their enemy. Although our situation is severe, it's not out of hand yet.**