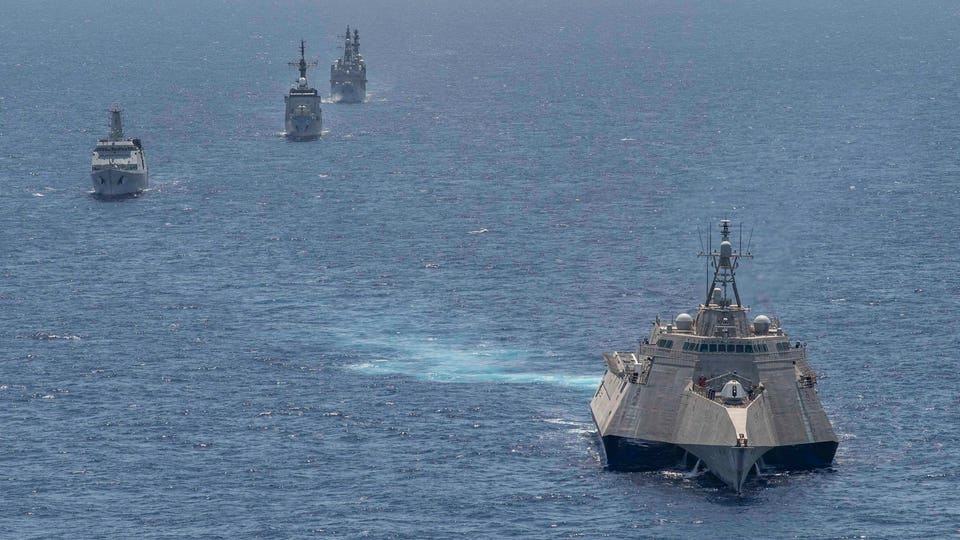 The Americans “demurred,” Sevastopulo and Hille wrote, “because it wanted to focus on boosting co-ordination with Tokyo in phases.”

A “former U.S. official” told the reporters the goal was for the U.S. and Japanese armed forces eventually to write a single integrated plan for a Taiwan contingency.

It’s fairly obvious what that means. The geography of the western Pacific region essentially dictates the role Japan would play in an allied defense of Taiwan.

The real revelation in Sevastopulo and Hille’s reporting isn’t the prospect of a joint U.S.-Japanese war plan. It’s that Japanese leaders apparently have resigned themselves to war in the event China invades Taiwan.

That was not always a foregone conclusion.

It’s quite clear that the United States needs Japanese support in order to stand any chance of defeating a Chinese invasion attempt. The bulk of U.S. forces in the western Pacific stage from Japanese bases including Kadena air base in Okinawa, Misawa air base on Honshu and Japanese ports including Yokosuka and Sasebo.

Ideally during a counter-invasion campaign, the Japanese government not only would allow U.S. force to launch combat operations from American bases on Japanese soil—Japanese troops also would join the operations.

There’s a growing likelihood they’d do so, if the rhetoric coming out of Tokyo is any indication. “We are family with Taiwan,” Yasuhide Nakayama, Japan’s defense minister, said during an online event on Monday. Taiwan’s integrity “is clearly related to Okinawa’s protection.”
茉莉花園 2021-07-03 21:59:31
Okinawa—and thus Kadena air base—lies just 450 miles from Taiwan. Okinawa and Taiwan are “kind of like nose and eyes, really close,” Nakayama said.

If Japanese troops joined their American allies in fighting for Taiwan, they would add mass to the intervention force. By itself, the U.S. Pacific Fleet with its roughly 200 combat ships is smaller than China’s own fleets are with their 360 front-line vessels.

Add Japan’s fleet to the American column, and the two sides are roughly equal as far as hulls go. And bear in mind, Japan’s warships are unusually heavily-armed. Tokyo’s fleet operates 36 modern destroyers and frigates—many of them with Aegis combat systems—plus 22 of the world’s biggest diesel-electric attack submarines.

What’s more, the Japanese navy is in the process of converting two of its helicopter carriers into aircraft carriers embarking F-35B stealth jump jets. Those flattops could grow by half the number of big-deck aviation ships a combined U.S.-Japanese fleet realistically could project into the western Pacific.

It’s clear where Japan would focus its operations as part of an allied force defending Taiwan. The Miyako Strait, a narrow passage between Okinawa and Miyakojima, a Japanese island that lies just 277 miles from Taiwan.

For a long time, China’s plan for invading Taiwan was simple—bombard the island then sail as many transports as possible across the 80-mile wide Taiwan Strait to the beaches of southwestern Taiwan.

But a direct attack undoubtedly would be a bloodbath. The Taiwanese armed forces have had decades to fortify the obvious approach. They would contest every mile with torpedoes, mines, artillery and missiles.

Increasingly, the Chinese navy and air force are exploring indirect approaches to Taiwan that could allow them to bypass the stiffest beach defenses. It’s not for no reason that the air force has been sending bigger and bigger formations of fighters, patrol planes and bombers around Taiwan into the vast expanse of the Philippine Sea east of the island country.

Likewise, Beijing is acquiring aircraft carriers—two are in service, a third is under construction—in part to provide air cover for warships operating east of Taiwan.

There are two ways for Chinese forces to break out into the Philippine Sea. One, they could fly or sail around southern Taiwan through the Bashi Strait, southeast of the island.

The southern option is risky. Taiwan is building up a force of more than 200 new and upgraded F-16 fighters. One of their main missions in wartime would be to patrol the Bashi Strait. One analyst even urged Taipei to buy aerial tankers to help the F-16s to spend more time over that strategic chokepoint.

The other option is to punch through the Miyako Strait. That’s exactly what the Chinese carrier Liaoning did back in April in the early days of closely-watched deployment to the Philippine and South China Seas.

If Japan joined the war over Taiwan, it could transform the Miyako Strait into one of the most dangerous waterways in the world. Tokyo has been fortifying the islands around the Miyako Strait with new radars and anti-ship missiles and is buying F-35B jump jets to fly from them.

The Japanese navy’s wartime doctrine focuses on the defense of the strait. Submarines would lie in wait for Chinese ships. Roving battle groups, protected by Japan’s new flattops, would add their anti-ship and surface-to-air missiles to the Miyako Strait’s defenses.

A clear willingness by Japan to send its troops into battle over Taiwan severely could complicate Chinese planning. Perhaps to the point of making an invasion unacceptably risky.

That’s the whole point of Tokyo’s new willingness at least to discuss an active role in Taiwan’s defense. “We have to show deterrence to China,” Nakayama said.
燒腩四寶飯 2021-07-03 22:01:50
中國人為台灣而戰的可能性越來越細