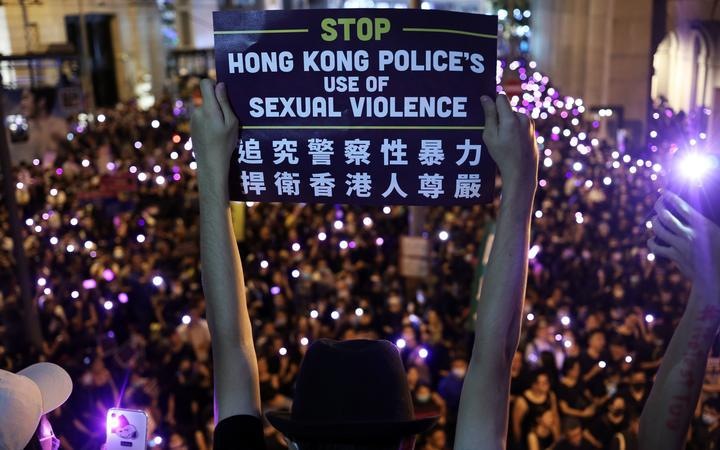 It is no secret that the Hong Kong Police Force has used increasingly violent and morally reprehensible measures to crack down on human rights in Hong Kong, aided and abetted by the government. Despite hard video evidence and compelling witness accounts, the police have not been held accountable for their crimes. Among the most heinous of these human rights transgressions, often overlooked by observers, is their consistent and overt use of sexual violence as a tool of oppression.

Arrested Protestors Routinely Subjected to Sexual Violence
In the first few months of the protest movement in Hong Kong, there had already been many accounts of female protestors being strip-searched in the presence of male police officers after they had been arrested. Victims described male policemen jeering and commenting on their sexual organs, while female officers looked on in quiet support. Male police officers have been captured on video manhandling female protestors and assaulting them in the breasts and genital areas. Confronted with these claims, the police force strenuously denied any wrongdoing and claimed that there was a conspiracy against them.

Indecent Assault During Frisk and Wall Search
Without any checks on their power, police officers have become even more shameless in their use of sexual violence. Last week, when police officers stopped double-decker buses at bus stops for random searches, several women were forced to strip to their underwear in public, purportedly to show that they were not carrying any weapons. Many have also lodged formal complaints about having their underwear dislodged and their private parts exposed while being frisked. A majority of these young women had been searched at whim, and were not even under custody. The problem of the police’s sexual violence potentially extends to every single woman in Hong Kong.

Gang Rape in San Uk Ling Detention Centre
The notorious San Uk Ling Detention Centre, near the Hong Kong border with mainland China, is the crime scene of some of the most horrifying acts of sexual violence in the past few months. In a detention centre where no CCTV monitoring is available, female protestors were strip-searched in pitch-dark cells, and many were even gang raped by police officers. Their male companions were forced to watch before being beaten and tortured themselves. Female detainees were not the only victims: male detainees were also subject to repeated anal rape by police officers. Calls for an independent investigation were firmly rebuffed. No one, including legislators and lawyers, were allowed into the detention centre, leaving victims with little recourse to justice.
Dragon-of-IKEA 2019-10-11 02:49:50
A Culture of Sexual Violence in the Police and Government
There is a culture of sexual violence and male chauvinism in the Hong Kong police. Frontline officers have been caught on video making casual remarks about raping female protestors, justifying their use of sexual violence. Their superiors have refused to condemn the sexual violence perpetrated by frontline officers, laying the blame solely on the victims. Female politicians within the government are equally wiling to embrace patriarchal norms and weaponize sex: as an example, Executive Committee member Fanny Law falsely accused female protestors of offering free sex to male protestors, describing them as “comfort women”.

On 10 October, a brave survivor of sexual violence from San Uk Ling spoke up in a forum with the Vice-Chancellor of the Chinese University of Hong Kong, describing the horrors in San Uk Ling in detail and appealing to the school for support. Her efforts and bravery were in vain, as her Vice-Chancellor refused to formally condemn the police’s use of sexual violence despite hearing her firsthand account. A white terror has now spread over Hong Kong where victims face humiliation and even punishment for daring to speak out against police violence. Physical and sexual violence have not just been tolerated, but even encouraged and rewarded by the authorities. A revolution of our times is needed to overthrow the twisted norms and moral bankruptcy that defines the Hong Kong government and the police force. We owe it to all the victims of sexual violence to continue our fight for justice to be done.

===
我哋係抗爭者自發組織亦非大台
We are an Independent civilian organisation,
pledged to be the voice of Hong Kong's oppressed.
成立新聞社是為了抗衡政府及警察嘅抺黑
HKCNS provides the counterbalance of smear tactics from the HKSAR government and its Police Forces,
將真正抗爭情況告知世界
Revealing to the world the truth of our cause.
===
寫手不足﹑招募！求義士協助﹑編纂高質新聞稿｜限時有效｜
https://t.me/joinchat/JABufk663yTdXdU7ErWQhQ
Dragon-of-IKEA 2019-10-11 02:52:25
Please share and tweet!!!
chapstick 2019-10-11 03:00:55
Disgusting. Entire police force needs to be shut down and rebuilt

It is disgusting that they rape both female and male protestors.
香港警察醉愛強姦 2019-10-11 20:48:19
Is anyone post it on reddit？
Pls share the link
Let lihkg user upvote it
第 1 頁
吹水台自選台熱 門最 新手機台時事台政事台World體育台娛樂台動漫台Apps台遊戲台影視台講故台健康台感情台潮流台上班台財經台房屋台飲食台旅遊台學術台校園台汽車台音樂台創意台硬件台攝影台玩具台寵物台軟件台活動台電訊台直播台站務台成人台黑 洞